This post outlines the impact of Google Inbox on your email marketing tactics and makes 4 suggestions for modifying your approach.

Just about every client we’ve ever worked with at one point or another has struggled with some aspect of email marketing strategy. Some of the common questions we generally hear:

The release of Google Inbox towards the end of 2014 made this last question much more interesting to me. We’ve said for a while that the traditional HTML newsletter was dying. The inbox has become so jammed that anything that even looks like marketing or promotion is getting passed right by — sometimes even from a trusted source. With Google Inbox, increasingly messages won’t just get passed by, they’ll get set aside.

What is Google Inbox?

If you’re not familiar with Google Inbox, here’s the skinny. For a long while, Google has been working diligently to develop a more intuitive and elegant email client, which it officially released towards the end of 2014. While the new email interface offers a variety of helpful useful features, the one that really jumps out to the email marketer is the “bundle” functionality. Essentially, Inbox automatically scans your email as it comes in and categorizes them into bundles, which are presented as tabs. There are three standard tabs in the interface — a Primary tab for regular correspondence, a Social tab for messages from Facebook, LinkedIn, Twitter, etc., and a Promotions tab for promotional messages. Now, if you’re a regular Gmail user (which I’m not), I’m not telling you anything new.

So, let’s take a look at what Google Inbox does with a few different test messages coming out of our marketing automation system.

As subscribers to our email newsletter know, the vast majority of our marketing email arrives as a personal message from me. It’s not branded. It has no masthead. It’s just a simple text message built in HTML with a link to an article in the body of the message and an unsubscribe link below my signature. Here’s an example: 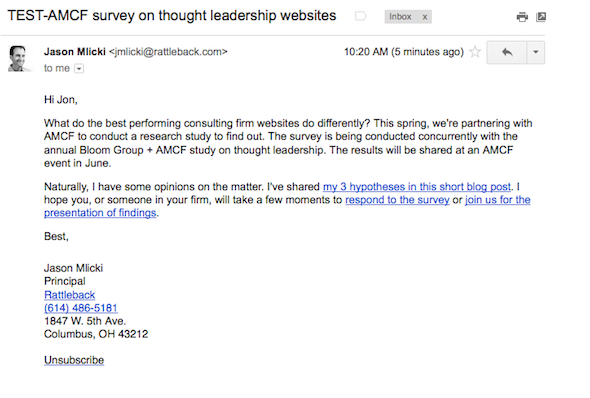 And, here’s how this message arrived in my Google Inbox within the Primary email bundle (the bundle for most general email correspondence):

That said, we also distribute a client and friends newsletter once per quarter. This is an HTML newsletter that is branded with a masthead and includes links to recent project case studies and high quality content. Here’s an example of one of those messages: 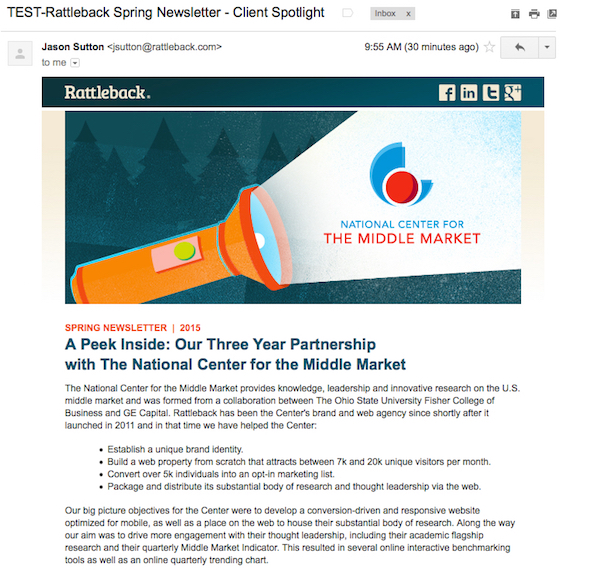 And, here’s how the test message arrived in my Google Inbox within the Promotions bundle:

And, in case you didn’t notice, my valuable newsletter not only got routed to the promotional bundle, but was also delivered directly next to 2 new Google ads.

But, Do Companies Use Gmail?

Now, I know what you’re asking yourself, “We’re a professional services firm. Our clients are companies, universities, municipalities, energy producers…they don’t use Gmail. Do they?” While I’ve not been able to find any current definitive data, it appears that anywhere from 10% – 30% of companies are using Gmail. This 2011 research found that 31% of large companies and, notably, 58% of educational institutions were running Google Apps. And, this 2013 study found that 30% of responding companies were using Google Apps. To be clear, a company using Google Apps is not necessarily using Gmail. In fact, the 2011 study estimated about 30% of Google Apps users actually did.

Simultaneously, cloud-based email is becoming more and more popular in the enterprise (Gartner predicts 55% of companies will be operating this way in the next 5 years), and Google is one of the leading providers. So, it stands to reason that some reasonable share of users in large companies will be using Gmail in some shape or form in the near future.

Of course, just because a company is using Google as their cloud mail provider doesn’t necessarily mean they’ll use the Gmail interface to access mail. Some will use Google to serve mail behind the scenes to a traditional Outlook-like solution. But, if the Google Inbox interface proves to be popular, presumably, other providers of cloud-based email services (like Microsoft) will mimic this type of user experience. So, chances are good that “inbox bundling” will be a growing trend — potentially leaving your firm’s good old HTML-newsletter relegated to a 3rd-tier bundle of promotional messages that users largely ignore all day, everyday.

So, What Should You Do?

I can’t say for sure how Google Inbox actually works because I don’t work at Google, but as I see it, there are a few course of action you can probably take to keep your email in the Primary inbox so it’s more likely to be read:

Here’s a good article on Google Inbox if you want to learn more.