This post outlines the dynamics of the network economy and Google’s ever present and growing role within it in the context of thought leadership marketing.

“Software is eating the world.” This classic Marc Andreessen essay penned in 2011 for the Wall Street Journal, has been quoted time and again over the last 5 years to describe the digital upheaval in our economy. But, after reading The Seventh Sense by Joshua Cooper Ramo, I think it’s time to update the refrain — in 2016, it should read “networks are eating the world.”

I’m not going to claim that we’re entering a network economy because we’re way past the point of entry. We’re deep inside the network economy and it has already fundamentally changed how business, professional services marketing and politics work. This post does my best to synthesize some of the fabulous insights inside Ramo’s work, combine them with some of my own experiences, and make sense of what the network economy means to thought leadership marketers via Google. To do that, I’m breaking this post into 4 parts:

#1 – The Path to the Network Economy

I began studying services marketing some 15 odd years ago when I was in business school. At the time, the common narrative was that we were migrating from an industrial to a service-based economy. It had become increasingly difficult to differentiate a product and companies were looking for ways to migrate towards higher value, higher margin services. This was probably most evident in the technology sector where large product companies migrated themselves upstream towards professional services offerings (think IBM circa 2000). Now, this 1st transition did not really change the fundamental dynamics of markets. Specifically, the law of diminishing returns still applies. As a market grows, new entrants arrive that inevitably drive the price down and commoditize the offering. A great example would be the story of CSC Index shared by Bob Buday at KA Connect 2014. While the firm “discovered” the concept of business re-engineering, it was primarily the large firms that drove the service to scale — driving down margin along the way. And, certainly we could all likely identify hundreds of service offerings that have essentially been commoditized in similar ways.

Now, the commoditization of services is not going away. Clients probably have access to way more architects, lawyers, accountants, engineers and consultants than they probably need. What they often lack, however, is access to deeply relevant, actionable advice. And, this brings us to the 2nd transition — that of the transition from a service to a knowledge economy. While you can’t “out service” the next firm over, you can build separate and unique knowledge relative to it. Clients show time and again that they’re willing to pay a premium for firms that are able to demonstrate that they have special knowledge that is built to solve problems unique to their industry, role, organizational structure or business dynamics. This, of course, has emerged as a rise in specialization — healthcare only architecture and consulting firms, education focused technology firms, etc.

For professional services firms, the knowledge economy has been an effective remedy to the commoditization of services in general. Of course, what the knowledge economy has spawned is the rapid expansion of content and thought leadership. Firms of all shapes and sizes are rapidly trying to demonstrate their expertise through thought leadership marketing. Now, the market dynamics of the knowledge economy aren’t terribly different from an industrial or service economy. Essentially, the knowledge-driven firm has just found a better way to influence the supply and demand equation. It’s shrunk the available substitutes for its product or service and built tangible value that’s worth a premium to some clients in certain instances.

The network economy, of course, connects all that. It creates a web of connections between all those pockets of knowledge whatever and wherever they may be. Google has become the greatest aggregator of information in the history of the world. And, in a nutshell that describes one of the defining characteristics of a network economy. In a network economy, the law of diminishing returns is reversed. The central node in the network eats everything around it and reaps 99.9% of the value in doing so. It’s a winner take all market. There is no second place.

#2 -Google is the Central Node in the Information Network

The defining characteristic of a network is that it creates both “distributed access” and “consolidated power.” 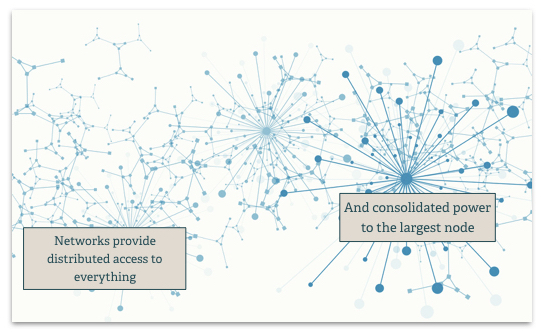 In the case of Google, “distributed access” means that it has opened the world to anyone. Marketing with thought leadership has never been more effective OR noisy as it is today. To start, Google has enabled us to do something we hardly thought possible even 10 years ago. We can connect our firm’s expertise with a problem a client is trying to solve precisely at the moment they’re thinking about it. That’s truly astounding. Firms have been marketing with thought leadership for over 50 years, but up until now you published content and sent it to people in the hope it might be relevant. Now, clients can literally find it at the moment it’s entirely relevant. In so doing, Google has opened the world to your door. Anyone with a keyboard and a blog can open a market thousands of miles away if they have something important to say. Our agency can attest to this — in the last few years we’ve fielded inquiries from Nigeria, Dubai, the Philippines, England, Germany, Canada, New Zealand, and Australia. So, thought leadership marketing is more effective than it’s ever been.

Yet, “distributed access” in this case also means “distributed contribution.” Google has also enabled the greatest explosion of intellectual property in the history of the world. As far back as 2010, Eric Schmidt stated that “we create as much information in two days now as we did from the dawn of man through 2003.” While Google may be the greatest tool ever created for the thought leadership marketer it’s also brought unprecedented noise to the system. So, thought leadership is more crowded than ever.

Simultaneously, “consolidated power” means that Google has become the largest, central node in that network of information economy by a factor of 1M (or more?). Nearly 70% of all web searches in the U.S. go through Google. As a result, it acts as an automated editor-in-chief — its search results help me determine which topical article is most important. It’s a trusted referral partner — the top search results are increasingly viewed as proxies for knowledge and expertise. And, of course it is the de facto source for the answer to every question in existence. As the central node in the world’s information network it has become the most profitable company in the history of the world.

In the network economy Google opens doors in ways we might never thought possible with such efficiency that it’s becoming the world’s only doorman.

#3 – Google is Reshaping the Way We Think

Over the course of a year, I speak with hundreds of professional services marketers from across the country and around the world. One of the things I always find interesting is hearing how they found their way to our agency. Around 60% of the time they found us through the web. And, when they do, they’ll usually tell me something like this, “I googled XYZ and you guys came up; then I googled ABC and you guys came up again. After reading some of your stuff, I figured you must really know something about this topic.” Ultimately, they’re making inferences about the quality of our knowledge on a topic based on where we reside in Google search results. I like to state it this way — high quality thought leadership isn’t high quality unless Google says it is. This is why I call Google both an automated editor-in-chief and a trusted referral partner.

To demonstrate my point, below are two lists. The first is a list of search results provided by Google for a search on the phrase “water and waste engineering firms.” The second is the ENR 500 list of the top 20 engineering firms in the U.S. by billings in the water industry. You’ll notice that only 2-3 firms in the Google search results appear in the ENR 500 list. Which is reality? 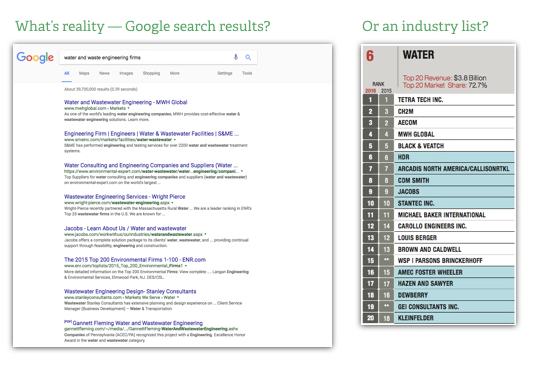 In a webinar I gave through ACEC this summer, Don Sherman, head of the ACEC Sales & Marketing Practice recanted a story from his experience leading business development for a global A/E firm with a top 5 transportation practice by billings. His firm was left off the short list for a major project in the UK because the client didn’t see his firm’s name appear in a list of Google search results. Let me ask the question again, which of these two lists is reality?

#4 – Because Google is Complex We Need Practical SEO Solutions

One of Ramo’s great contributions is the nuance he draws between things that are complicated and those that are complex. A commercial airplane is made of hundreds of thousands of parts and is a complicated work of engineering. That said, it can be designed, engineered, planned, manufactured and assembled in a logical, predictable or at least measurable sequence. “Complicated systems are packed with parts, but they are predictable.” By contrast, a complex system has thousands or millions of points of input that constantly enter the system to modify and shape the output. An artificial heart is complicated. The human immune system is complex.

By that definition, Google is clearly a complex system. The bots used to index site pages are constantly scanning the web for new input, the algorithms used to render search results are constantly interpreting the data that comes back, and the system is practically instantly providing search results to users based on the topic of the search, where it was made, who made it and the device it was made on. No two searches are really ever the same. In fact, Google, has gone on record as recently as 2012 to state that as many as 15% – 20% of searches performed each day have never been searched before. And, that’s with over 1.2B daily searches at the time (there are now over 2.6B searches a day).

This is all to say that you can’t game Google nor should you try. No one can guarantee that your site will rise to the top of search results. Getting found online is not about tricking Google or hiring some “techies” to do some “keyword magic” to rise to the top of search. No one’s smarter than Google. That’s because Google is a complex system. Yet, I’m wiling to bet that it’s the single greatest source of traffic to your site. So, while it’s a complex system, we can’t just toss it aside and let the “techies” to deal with it. The good news is that we don’t have to understand all of its technical inner workings to make it a more effective tool for our business. We simply need to take a practical approach to SEO to maximize the likelihood of our content being found — for more on this, check out our webinar, a Practical Guide to SEO for Professional Services Firms.

Ultimately, I think your goal is to become a knowledge-driven, networked practice. Building a practice around deep foundational knowledge is the best path to keep the forces of commoditization at bay. And, understanding the dynamics of networks in all their forms and leveraging them to the best of your ability will be the foundation of marketing such a practice in the years ahead.